After decades of attempts from the powers that be to diminish the rave culture of the 90s, the free party movement has entered an era of resurgence.

The early 90s was a very grey time. Between Thatcherism, miner strikes and the introduction of poll tax, more and more of the population flocked to raves as a means for escape. The culture soon became a movement, as acid house parties developed a symbiotic relationship with the tabloids. 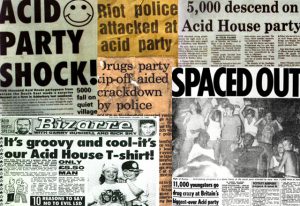 Four-page scandal stories broadcasted by the press served as nationwide advertising. What was dubbed the ‘second summer of love’ became a UK-wide counterculture. Finding out about raves became half the fun–not knowing where you were going or who you’d spend the night with was a rush, and to share the experience with 20,000 people made you feel part of something. You may never have met these people before, but you were with them. 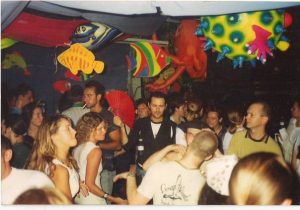 Today, amongst headlines of corruption, disease, government failures and unbridled rates of inflation, the UK rave scene is experiencing a renaissance. Under unprecedented COVID restrictions on social interaction, stories of illegal warehouse raves dominated the media.

Even the fashion trends of the early 90s are re-entering the mainstream, with wide-leg trousers, boiler-suits, smiley faces and vibrant colours all becoming the latest festival season crazes. As hard times fall upon us once again, a counterculture so heavily politicised as acid house has proven itself as the natural escape route for many. We have chosen to look back to move forward–and that is what makes the resurgence of rave culture so exciting.